Geographical position of the town and its hinterland

Suchy Las as a village which was totally destroyed in the 17th century. It was founded again in the 19th century by German settlers. A community is located in the province of Wielkopolska. The seat of the community is the village of Suchy Las which is in close neighbourhood to Poznań. There are 8 biggest villages. The most important are: Suchy Las, Biedrusko, Złotniki, Chludowo. The area of the community is 116.55 km². About 16,000 people live in the community of Suchy las, and 6,600 in the village. A military training ground takes up more than 60% of the community area. Polish soldiers train here but not only. Also police officers or soldiers from other countries such as Germany. The largest lake is Lake Glinowieckie. It is located on the training ground. The forests in our community are rich in a variety of trees and plants. Usually they are mixed. Suchy Las has chernozem soils and podzol soils. There is a nature reserve Meteorites Morasko. It has six large craters that have arisen as a result of meteorite impacts about 5 thousand years ago. Suchy Las is located in the temperate climate zone. The annual rainfall is 500 mm. Snow falls are very poorly here. The average annual temperature is 9°C. Suchy Las is one of the best developing communities around Poznań. Retail and industrial trade, services and industrial production are main contributors to the local development. Many leading companies have their seats in Suchy Las, among them Apart (jewellery) or car dealers (e.g. Porsche).

We have in Poznan one of the oldest airports in Poland, its called Ławica. The old airport was built in 1913. Now Ławica  is quit modern, but small international airport. From Poznan you can fly to almost 30 cites in 15 countries in Europe. There is also the new main railway station in Poznan, commonly called Dworzec Główny. The station is in the city centre, in the vicinity of the bus station, Poznań International Fairs, Poznań University of Economics and Adam Mickiewicz University. It is international, you can go by train from here to Berlin, Minsk and Paris.

Poznań public transport with its network, timetables and tariff is unique in Poland. Trams are the core of the system – most of lines go with a frequency of 10 minutes. Bus lines play a complementary role to the tram network. This solution encourages passengers to change, offering high frequency connections with changes, instead of low frequency direct connections. It also makes the network less extensive and complicated to passengers. Bus and tram lines run daily from 4.30 to 23.00 . At other times communication in bus lines is available and the tram line No. 201 runs to the city center in the direction of Piątkowo. Poznan has an alternative to a metro. It is Poznański Szybki Tramwaj, 8,1 km long line, which is accident-free and arranged in a dig and flyover tram route. The route is crucial for communication in the central and northern parts of the city. Its capacity reaches
6 000 persons per hour. Poznań was the first Polish city which introduced time tickets. You have to buy ticket before getting on board. Tickets are sold in kiosks, shops, supermarkets and ZTM Customer Service Points. Prices are determined by the type of the ticked and tariff zone.

Public Transport Facility in Suchy Las supports 6 fixed communication lines that connect the center of Poznan and its northern districts of towns and municipalities like Biedrusko, Chludowo, Golęczewo, Zielątkowo, Złotkowo, Złotniki, Suchy Las. In these buses you can use the same tickets which are used in Poznan. The Department of Public Transport in Suchy Las has 21 buses to handle communication lines, of which 18 of them are low-floor MANs.

Suchy Las community consists of about 16,000 citizens. 60% of them are in the productive age, which means that they are able to work. The percentage of those unemployed decreases each year. In 2010 12.02% of people in the productive age were jobless. In 2011 that amount reduced to 11.71%.  According to survey’s results,  both accessibility and quality of cultural and sport and recreation offers provided by the borough were rated as good. However, the tourist offers were determined as low. Additionally, the condition of the road infrastructure is a downside of the Suchy Las area. On the other hand, the education is a great asset. The availability and quality of primary and middle schools were rated as very good. Unfortunately, there is a lack of kindergartens. Another advantage of Suchy Las borough is health and social care. Their standard is regarded as fine. Residents think that our borough has to primarily improve the road maintenance and the sewage system.

Suchy Las community has got many things to be proud of. However, a few of them do not meet citizens’ expectations. This is why our borough is still improving, which only means a better and more peaceful life for all of us.

Currently about 16000 people live in Suchy Las. The number of unemployed is decreasing from year to year. In December 2013 there was about 1.71% of these people, but in 2014 there was only 1.29% of unemployed. In November 2015  there was 1.31% of them. To conclude more and more inhabitants work in the surrounding companies and in Poznan these days.

The conclusion of this report is that Suchy Las is a well-developed village, which won’t lose its good position among the nearest settlements with low unemployment. The task of the local government is further decreasing the number of unemployed people in our village. Now they bring in new ideas, solutions and amenities.

Near Suchy Las – in Chludowo you can visit a historic larch church from 1736 founded by Cistercian from Owińska, after the fire of an earlier church. In the left chapel there is a picture of Mother of God painted on wood from the sixteenth century  and Missionary-Museum of Ethnography. 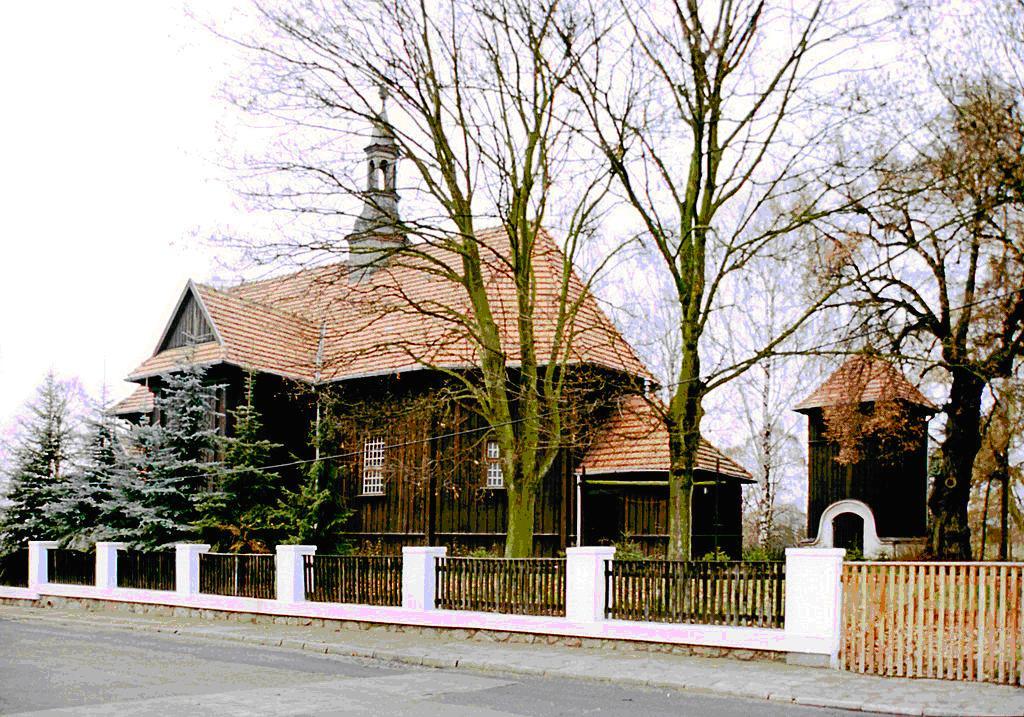 In another village in the close vicinity – Biedrusko you can admire a Neo-Renaissance palace  surrounded a picturesque park from the end of the nineteenth century, built by Prussian man. Later he sold it to the German army, because they needed the palace for the officers. After the Second World War the palace was a base of Polish army. Now there is a hotel and a restaurant. 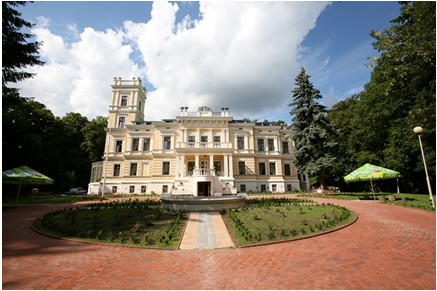 We are proud of a modern building of Water Park OCTOPUS, which is located in Suchy Las. There are 8 tracks and one small pool for children. In addition to the swimming pool in the same building there is bowling, a restaurant and well-equipped studio and conference hall.  In the vicinity of the Water Park you can find a sports hall of the Municipal Sports Centre, which is suitable for basketball, volleyball, handball and indoor football. The audience  has 320 seats with the possibility to install 180 more. Next to the Primary School in Suchy Las there are some pitches: two for football (6000m2 and 3000m2), where a club Suchary Suchy Las plays their matches, and two for basketball. On the same street as the swimming pool there is one of the biggest and most modern culture center and public library in the region.

Suchy Las is located near Poznań that is a big city. Lots of people, who live here, work in Poznań.  After their jobs they do their shopping in local shops and are offered a variety of services.

In Suchy las there are a lot of shopping facilities and services. A few years ago there were only several shops and one supermarket but since then shopping facilities have developed a lot. The biggest and the main shopping facility in Suchy Las is a big shopping mall ‘Galeria Sucholeska’. There are many useful shops that provide you with the products you need on daily basis. Apart from that there are also many discounts for example Biedronka, Chata Polska, Lidl. They offer relatively cheap products and have a really big range of them. In our community there are lots of services so there is no need to go to Poznań. Besides buying food we can also buy fashionable clothes, shoes in the shopping mall and other smaller shops.

Suchy Las has also very impressive gastronomic offer. Everyone will find here his or her favourite cuisine eg. Japanese, Italian, Polish etc. The places are also different in terms of the level of services starting with  asmall bistro until luxury restaurants. For students and hurrying people there are also some food tracks with chicken or hamburgers.

If anyone in Suchy Las wants to benefit from the basic medical care and pharmacy can go to some chemist’s shops and medical centers.

Living in Suchy Las is really pleasant, because there are a lot of improvements also in respect of cultural services. Citizens can rest going to theatre and summer cinema. Many people from Poznań want to move to our community because of comfort of living and beautiful surroundings.

Let’s try to be an  entrepreneur! Have you ever thought about starting a business? It is a hard way with registering and running a business. But don’t worry there are a lot  of people and institutions that offer  help.

I will go step by step. First of all you need to have a creative and original idea. Then try to find a place where you want to start. Name your business. These are the basics. In every country you need to register your business, otherwise it is illegal. In every town hall or your city’s website you can get all information about registration.  In most of the countries you can fill in the entering form online.

Unfortunately everyone has to pay taxes. If you are new you can get tax advice in town halls and on the Internet. For example, in Suchy Las’s Town Hall there is a tax agency that is open on every first Monday of a new month from 5 p.m. to 6 p.m. and it is free!

Each business has to be skillfully advertised. There are a lot of companies that offer gifts, gadgets, billboards, exhibitions, marketing events and etc. In Suchy Las we have quite a few of those firms. The best known ones are: PDMG,  IMART and ANB.

If your business needs more money don’t worry, you will get some help from banks. They offer credits for new businesses even if your firm is not big. In Suchy Las we have so many banks that offer that kind of credit. For example Bank PKO, Millennium Bank and Alior Bank.

IT help is also important. Most of companies has their own website, e-mail address and all that online stuff. Company called GCI –IT Solutions  helps with all that stuff that can be hard.

There are also companies that help with taking subsidies from European Union.  In Suchy las there is one called LARG.

So don’t be afraid to start your own business in the future.

One thought on “Business in Suchy Las and its surroundings”